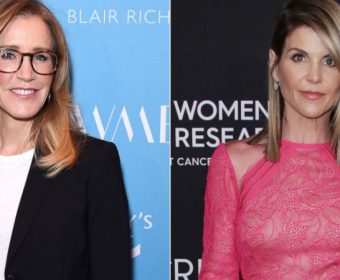 Actresses Felicity Huffman and Lori Loughlin were two of more than 48 people charged this week in an extraordinary, nationwide college admissions cheating scandal. The schemes involved wealthy backers paying up to $6.5 million place their children in some of the nation’s top universities, according to federal court records. (FoxNews.com)

The alleged admissions cheating scam – which put the students into top programs at Georgetown University, Yale University, Stanford, University of Southern California, UCLA and the University of Texas, was operated by William Singer, who lives in California. He helped the parents get their sons and daughters through admissions at elite programs by paying bribes, according to federal charging documents. Federal officials have been on this case, called Operation Varsity Blues, for at least a year. (CNN.com)

Singer, who is the founder of an admissions consulting company, pleaded guilty to federal charges in Boston for racketeering conspiracy and obstruction of justice.

At least 13 people, including the above-named actresses and husband Mossimo Giannulli, where placed under arrest this week and will make their initial court appear later today.

Singer ran his charity, called Key Worldwide Foundation, which got a total of $25 million to guarantee the admissions, according to US Attorney Andrew Lelling during a news conference this week. His charitable foundation was allegedly used to front the scammy admissions process.

According to the FBI, this is a case where parents flaunted how wealthy they were, spared absolutely no expense to cheat the college admissions system so they could set their children on a path to success with bribes.

While many students did not know their admission to the program came from a bribe, some children knew about it. Singer would do whatever the parents wanted to do. It appears the universities themselves were not involved.

The parents allegedly paid a certain amount of money knowing it was used as a bribe to get their child college admission. The money would be sent to an SAT or ACT administrator, or a coach who would create a fake profile for the student, no matter their athletic ability.

Lelling stated in the press conference there can be no separate college admission process for the rich, and there will not be a special criminal justice process for them either. These were active acts of deception and fraud, and are serious felonies.

Singer was very open about his business model with parents. He said that his company could guarantee that the richest families in America could get their children into school. These families wanted a guarantee and he provided that service.

Singer also helped the children of the rich clients have another person take ACT and SAT tests for them. Parents could pay as much as $75,000 for every test and wire the cash to a ‘charitable account.’ He would tell the clients that the ACT and SAT scores should be high but not too high. He then told Mark Riddell in Florida to take the entrance exams for the students or to replace student responses with his. Riddell has been employed with Singer for eight years.

He also allegedly used the phony charitable donations from parents to give bribes to ACT and SAT test administrators, federal charging documents state. Some parents also would send their children to therapists that Singer paid for to get notes saying the student should get more time to take the ACT or SAT.

One of the college coaches allegedly caught in the web of deceit is Rudy Meredith, who was the head women’s college coach at Yale University, and John Vandemoer, the sailing coach at Stanford University. Vandemoer has been fired.

Singer offered bribes to coaches to provide slots the colleges gave for new athletes with the children of his clients. To evade any chance of suspicion, Singer and the coaches told the students to pose for photos or would change stock pictures and put the child’s face onto an athlete to support the admission.

Meredith, who quit his position last year, created a false athlete profile for an applicant that said the person was going to be on the women’s soccer team at Yale, even though the person never played soccer. Singer provided Meredith $400,000 after that student received her Yale admission.,

Also, a Georgetown tennis coach took bribes from 2012 to 2018 that were for at least $2.5 million. In exchange for the bribes, the coach chose 12 applicants as possible tennis recruits, including some who did not even play tennis, which was used to get them into the university.

Many of the phony student-athletes never went to practice and others faked injuries. Some played for a brief time and quit the sport.

Both Huffman, and her husband, actor William Macy, have been accused of taken advantage of admission by the fake ACT and SAT process. The documents said that the parents allegedly assisted their daughter with college admission by making a charitable donation of $15,000 so they could work in the cheating scam with the ACT and SAT. Huffman made efforts to try the scheme another time for another daughter, then decided not to do so.

In a recent interview with Parade, Macy talked about the great stress of applying for colleges for his daughter. He said that once she gets in, maybe she should take a year off, thinking she should take a gap year. But she ended up being accepted through questionable means and beginning college anyway.

According to federal authorities, many parents and some of their children could be charged and may face serious federal jail time, if convicted.