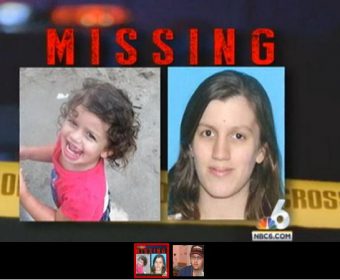 A Florida mom fled town with her daughter instead of letting anyone ‘vaccinate and brainwash’ her daughter, who is 2.

Megan Everett is 22 and is wanted on federal kidnapping charges after she fled Sunrise FL with her daughter Lilly. She left a note behind that authorities said was very troubling.

Everett wrote that if she were to allow ‘them’ to vaccinate her and brainwash her, she would not be doing what is right. She said she can’t allow a judge to tell her how to raise her daughter.

Everett and Lilly’s father – Robert Bauman – shared custody of the child until May when Everett left town.

Everett and her daughter were last seen May 6, when the child’s biological father dropped off the girl. Lilly was supposed to give the child back to the father a week later but Everett did not appear.

Everett had started to take on the right wing beliefs of her new boyfriend, Carlos Lesters, about firearms and upholding the traditions of the Southern Confederacy.

A state judge wrote last year that he was not happy with the overall psychology of the situation and advised Everett and Lesters to be careful with guns around the child.

The judge also wrote that he was troubled that the child was in a home where the man carries a gun all day and there are many weapons and ammo spread throughout the house.

There was an extended custody battle over the child that seemed to be solved in April, when the judge granted each side 50% custody. The agreement was for Lilly to alternate between each parent’s house, with an exchange every Tuesday.

Everett’s new beliefs also meant that she intended to homeschool her child and not send her to preschool.

Everett’s mother actually sided with Bauman, saying that the child would be better off with Bauman at this time. Pam Everett told the media that she has four kids, and Megan is her youngest, but she does not understand what happened.

Police think that Everett may have left Florida in disguise. A tip came into the police that indicated that she had previously visited Virginia with her daughter. She may be hiding out with Lesters’ family in either Virginia or Georgia, the FBI stated.

Lesters stated that Lilly told him she was not coming back but he did not know where she went.

In this type of case, there usually is a lesser penalty than for a typical ransoming kidnapping case. The sentence in a parent kidnapping case often is about three years.