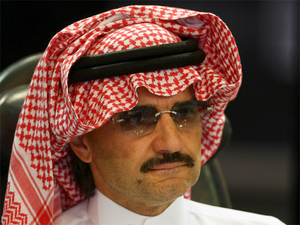 A billionaire Saudi princes and dozens of other princes are facing charges of bribery, embezzlement, money laundering and abuse of power after a major anti-corruption crackdown in Saudi Arabia last week, according to a Saudi official.

In total, 11 princes, four ministers, and tens of former ministers were arrested over the weekend after King Salman created an anti-corruption committee that is being chaired by Crown Prince Mohammed bin Salman, his 32-year-old son.

The new anti-corruption body was given very broad powers to investigate criminal cases, issue warrants for arrests, hand out travel restrictions and seize money and property.

The official noted that billionaire Prince Alwaleed bin Talal, who is a nephew of the king and the owner of the international investment firm Kingdom Holding, is facing allegations of bribery, extortion and money laundering.

Prince Miteb bin Abdullah also has been accused of embezzlement, and hiring fake employees, while also awarding contracts to his own organizations. One of those contracts was a $10 billion deal for walkie-talkies and military gear that is worth billions of Saudi riyals.

Former Riyadh Governor Prince Turki bin Abdullah has been accused of corruption in a real estate project and taking advantage of his financial influence to give contracts to his own organizations. Also, former Finance Minister Ibrahim al-Assaf who is a board member of Saudi Aramco, has been accused of embezzlement and taking advantage of his financial position and giving inside information to benefit people close to him in land deals.

These major political changes are a seismic shock to the Saudi system. This was apparently a long-planned move by the 32 year-old Crown Prince who wanted to remove the last obstacles to getting complete control over the largest oil producer in the world.

The arrests of princes, ministers and the billionaire Prince Alwaleed bin Talal have truly shocked Saudis who are not used to radical political change.

The crown prince is generally popular among younger Saudis. However, many older and conservative citizens in Saudi Arabia think he is moving too quickly. For example, he has started a war that is viewed by many as unwinnable in Yemen, while also fighting extremist Islamists.

However, many of his supporters say that he is trying to modernize his country after decades of being ruled by old men. They are welcoming what they call a fresh vision from a man who may well be king for decades.

Who Is Prince Alwaleed bin Talal?

He is one of the richest men on earth, with a net worth of $17 billion, Forbes reports. Shares in his investment firm, however, have dropped 10% since the news of his arrest spread across the world. However, Kingdom Holding is one of the most important investment firms in Saudi Arabia. It hold shares in Twitter, Apple, Citigroup, the Four Seasons hotel chain and Lyft.

He has been praised for employing women, a rarity in Saudi Arabia. As many as ⅔ of his staff are women. He also is known for desert resorts worth $100 million in a country where most people live at or below the poverty line.

In 2015, he provided luxury cars to fighter pilots who bombed Yemen. Saudi coalition forces are continuing to bomb rebels there in 2017, with 26 people dead in a hotel attack last week.

According to Robert Jordan, who is the ex-US ambassador to Saudi Arabia, the arrest of the billionaire prince would be like Warren Buffett or Bill Gates being arrested in the US. He also said that it is important to determine what the basis of the charges are.

Jordan, who was the top ambassador to Saudi Arabia during the G.W. Bush administration, stated that Saudi Arabia has had a problem for a long time with corruption, so the actions last week could be part of a broader crackdown. But he also said that these moves were probably part of the young prince consolidating his power.

The ex-diplomat also noted that Saudi Arabia has had a major corruption problem for decades. He believes that the population of the country has been unhappy with princes grabbing business deals and using public funds to fund public works projects that never seem to be built.

The price for a barrel of oil has surged to its highest point since mid-2015 after the major anti-corruption purge in the kingdom. The oil cartel OPEC is going to think about keeping production cuts at a Vienna meeting at the end of November. Experts believe that the high level of uncertainty about the actions of the future king are causing the price of Brent crude oil to jump to higher than $62 per barrel. It was priced at $50 in the first half of 2017. It is unclear how long the increased oil prices will affect international markets.